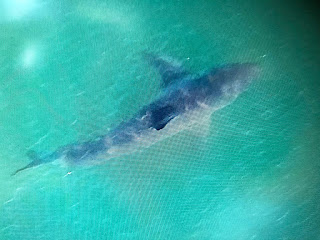 Above, is a large white shark that was tracked from Head of the Meadow beach, Truro, Massachusetts, summer of 2021.

Whales, seals, Mola mola (ocean sunfish), dolphins, huge schools of fish; in 25 years of surfing, swimming and body boarding the "outer cape", (Atlantic, east facing) i've seen a lot of wild sea life, but I've never seen a great white, or any shark in the water, until the summer of 2014, when, while surfing at Coast Guard beach, in Eastham, on a warm August day, my friend Dan and I witnessed something straight outta Shark Week.

The waves were small, we weren't very far out, the water was 6-8 feet deep. While we were sitting on our boards, we noticed the grey seals that were moving north, with the current, were none too happy about our being in the middle of their mid-day migration. The seals were grunting, groaning and were actually passing inside (closer to shore) of us, which is very strange, given we weren't very far out... We quickly theorized that there was probably a big great white patrolling, just offshore and the seals were aware and didn't want to pass to the outside of us (deeper water). Heeding the seals warning, we paddled about 50 feet closer to shore- to give the seals (and possibly shark) a wide berth. No sooner did we paddle into shallower water, we see a commotion, 50 yards to the north, same distance offshore as we had just been- A giant splash, followed immediately by a small seal breaching (jumping out) the water, and a huge, grey pectoral fin (arm), or possible tail, of what must have been a giant great white shark. The seal seemed to have evaded the strike, and I looked at my buddy, Dan, as we both said simultaneously: "you see that!?" As our eyes popped outta our heads. There was actually a young surfer not more than 6-10 feet away from the commotion, with his back to the action, and he was completely unaware of what just happened.

Every year would bring more great white sightings, one memorable photo, on the cover of the local paper was a guy getting chased on his kayak, by a big great white, at Nauset beach, early July, 2012.
2018 was different. As a surfer, most of my friends had either seen a shark in the water, or been called out because of a shark sighting. My friends and I had begun to alter our behavior to try to mitigate any shark encounters: we didn't get up and surf "dawn patrol" or surf into the darkness, as we had relished, in years past. We also started avoiding Nauset public beach, in Orleans, during the summer, because Nauset had by far the most sightings. After our experience at Coast Guard beach, a few years prior, we were kind of avoiding that beach, too. In fact, we were surfing more on the South Coast and South Shore; consciously, or sub-consciously, as a result.

I rented a beach cottage in Wellfleet, over Labor Day week, the unofficial last week of summer, in 2018, as i had in prior years; i brought the boards, plans for bbq, beers and surf with friends was on tap. A very peaceful, relaxing and beautiful time of year on Cape Cod. Crowds are down, traffic is light, and the shadows are getting longer. The sun doesn't blind you at 6 am, like it does, coming over the Atlantic, in June and July.

A week later, the Cape, and New England had the first person killed by a shark since ~1938, Arthur Medici. 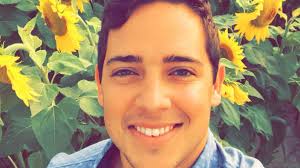