The NTSB (National Transportation Safety Board) released the transcript from the Voyage Data Recorder (VDR) of the SS EL Faro- a cargo ship which sunk at ~7:39 am, October 1, 2015, as it steamed into a rapidly developing Hurricane Joaquin. The ship was on its weekly trip to Puerto Rico, from Jacksonville, Florida. 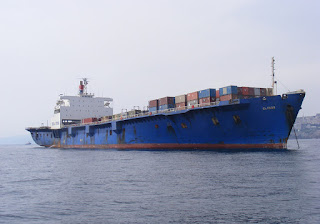 The transcript shows that Captain Michael Davidson repeatedly shot down his junior officer's suggestions and requests to change course, and that Davidson was mired in consternation throughout the trip.

The morning of the tragedy, the captain got back to the bridge, at just after 4 am (after being in his stateroom, since 8 pm the night before).  The ship's capabilities were being tested by Hurricane Joaquin, yet he still downplayed the storm.

With the ship and storm on a collision course, cargo was getting compromised, the engineers were trying to balance the ship, maintain the power plant and pump out seawater from the holds of the old steamship. After losing propulsion, the ship was at the mercy of 50 foot waves and 140 mph winds.  The SS El Faro, was only 22 miles from the storm center when it sunk. 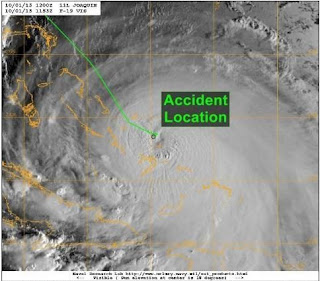 Once again, the Miami Herald and Florida Times-Union (jacksonville.com) do a great job in covering the SS El Faro. The Miami Herald map, below, shows the relationship of the ship's path into Hurricane Joaquin. 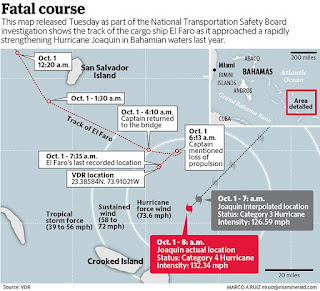 21:19:40.3 well right now– we got nowhere to go. you would have to– but later on there's a gap in the chart– you can head south– you know.– it's a good idea to have a– really– ideally– what (you/we) should have is a other alternate– you should have a backup route...

This is the most important conversation of the whole transcript, in my opinion. The "you can head south" bit, is, where I think Reihm is suggesting using the Crooked Islands passage as the "backup route..."

uhh well it's– the– the– the current forecast has it uhh– max winds um a hundred miles– an hour. at the center.– umm and if I'm lookin' at this right– um– and it's moving at– at two-three-zero at uh five knots. so I assume it stays on that same– moves that same direction for say the next five hours. and uh so it's advancing toward our trackline– and uhh– puts us real close to it. umm you know like– I could be more specific– I could um– plot that out. but it's gunna be like real close (and). and uh– don't know. uh– uh I can give ya a better number and call ya back. we're lookin' a meet it at say like four o'clock in the morning. (you know).

Reihm calls Davidson back a few minutes later after figuring out the tracks of the ship and hurricane:

23:13:38.3 so– at oh–four hundred we'll be twenty-two miles from the center. with uh max one hundred with gusts to one-twenty and strengthening so– the option that we do have– umm from what I can see– is at oh-two hundred we could head south. and that would open it up some– so I mean of course I'd want you to verify what I'm seeing. I do understand you expect us not get into the quadrant dead ahead and (expose) us. just so you know that– that's how that's how close we'll be.– your welcome.

A few hours later, second mate, Danielle Randolph, 2M, now in charge of the bridge, called captain Davidson @ 1:20 am to discuss the escalating situation. Although the conversation is not whole, the Captain and second mate (2M) talk on ship's phone (ET) about the ship's course and Danielle says: 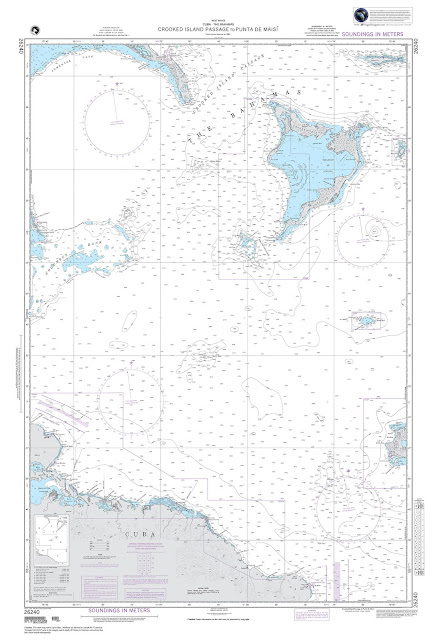 I think what seance mate Randolph is saying is; at 2 am, there is a course change to "straight south", which would send the ship through the Crooked Islands Passage, west of the Crooked islands (see nautical chart above); what 3rd mate Reihm suggested to Capt. Davidson, hours earlier on his watch... But, it seems, she doesn't like that route or is confused as to what course to take (it's unclear), Randolph mentions that the south route will put them over shallows and go through the Bahamas. In reality, the "shallows" she refers to is a commonly used, deep water pass (thousands of feet deep), that would not have added much, if any time to the run and would afforded some protection to the ship from the incoming hurricane.


This short, 1.5 minute conversation between Capt. and 2M Randolph was a mind fuck.  I think Reihm kept his southerly track as a "backup route" on the chart plotter, in the hopes of the second mate and captain taking his advice; after he left watch at midnight. This miscommunication between the captain and his officers was the last order of disconnect, that ultimately sealed the crew's fate.

After the call ends, the helmsman (AB-2) and Randolph, discuss the route change. The second mate contradicts herself when asked if they are gonna switch to heading 116.

Then, a minute later, as if the conversation with the AB-2 didn't just happen, she says- "alright @AB-2- let's start easing it over to one-one-six- nice and slow" You can see on Miami Herald map, where on Oct. 1 - 1:30 a.m., the ship changes direction to the direction of the storm, instead of heading south to the left/west of the Crooked Islands.

Hats off to to third mate, Jeremie Riehm, the lowest ranked deck officer, and the AB's: the abled bodied seamen, the helmsmen- with decades of experience on the water and the wheel (although low on the totem pole) were the voice of reason on the bridge, during the voyage.